There is a question among suppliers regarding the tender and procurement websites that are available in Canada. In order to clarify the muddle and compare and contrast the options here is an explanation on the options in Canada.

There are several portals for accessing, participating in, bidding and winning business, which is advertised through a RFx, which is an acronym that is a variation on RFP, RFI or its lesser-used sibling RFQ. Suppliers can access competitive contracts and bid for the business available publically.

The majority of this business is centred on the Public Sector as the government, and its related entities and organizations, is bound by legislation to offer its business openly, but on occasion private business is offered to bidders and suppliers on the private portals as well.

Toronto-based Biddingo competes with Merx and roughly provides the same service. It hosts tenders for provincial, territorial and municipal governments as well as related pubic sector contracts. It also scours the Internet for a limited number of private sector procurement bids. As of this writing Biddingo showed 1,884 tenders available for the last 30 days.

The Government Of Canada began making its tenders available on this portal beginning June 1, 2013. It is a free portal that hosts all current (and expired) Federal Government tenders and does not require registration. However, by registering a supplier could leave a profile behind and obtain its Procurement Business Number. Once an organization wins a contract the organization can get on a Standing Offer. The portal is run by Public Works And Government Services Canada (PWGSC). More recently, the government made moves to decentralize some purchases away from Public Works, but this portal remains the main source for procuring government needs. Since the government has various laws and international trade agreements it abides by there is a minimum threshold for bids which must appear on the website. As such, contracts for lesser amounts (typically less than $25,000) may or may not appear on the website.

Ottawa-based Merx was previously the sole portal for hosting the Federal Government Of Canada’s tenders. This contract ended on May 31, 2013 and the Government Of Canada moved its tenders to Buyandsell.gc.ca. It hosts provincial and other government tenders now as it competes with Biddingo. As of this writing Merx showed 2,998 tenders available for the last 30 days. The portal is a unit of Montreal-based Mediagrif.

Here is a bonus inclusion as it is pertains to only one province. The Ontario Tenders’ Portal is run by US-based BravoSolution since April 1, 2014, which was recently acquired by Jaggaer. This website hosts Ontario Provincial government’s tenders. Its interface and search capability are archaic, but is the source for tenders for Canada’s largest province. Moreover, as of April 1, 2018 vendors will no longer be required to pay user fees for online bid submissions on the Ontario Tenders Portal.

All the abovementioned websites offer search and e-mail notification services.

Post it in the Comments’ section if you have a question about any of these and I can help.

Request For Proposals are document vehicles through which private and public organizations procure goods and services. The process to use an RFP, or its variants namely Request For Quotation (RFQ) and Request For Information (RFI), are occasionally mandated by organizational policy and more often simply used to ensure the issuer receives the best and most appropriate goods and services from bidders at the most favourable terms. More completely, a RFx ensures there is clear communication between the two, or more, parties.

Naturally, the system is not fully efficient or fool proof. Additionally, resources are expended on the creation, consumption and reaction phases of a RFx. This is true to such an extent that organizations have dedicated units to creating and to answering these documents. Moreover, the process is developed to such an extent that there are consultants who write these things for organizations, sell pre-written and pre-compiled ones or websites that centralize the repository for such documentation.

Suppliers, however, do not typically like these documents. In sales circles there is little confidence that these procurement vehicles lead to business. Anecdotally, the success rate is low.

No surprise then that many vendors have stopped responding to these documents. The manpower to entertain these documents and the payoff is considered unjustified. 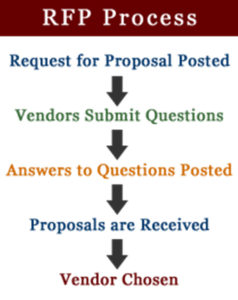 However, there is a time when you and your organization decide to play the odds and respond to an RFx despite the three points above.

Here are tips to increase your chances of winning the business:

On the flip side, should you decide you do not wish to proceed explain it to document issuer within the parameters of your organizational context, offer your free additional consulting and do express your wish that you work together in the future instead.

*Things That Need To Go Away: Organizations picking a supplier and subsequently issuing a RFP.