THE A To Z OF NEGOTIATION IN THE CORPORATE WORLD 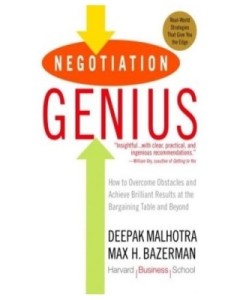 I had read the book Getting To Yes: Negotiating Agreement Without Giving In years ago. Was Negotiation Genius similar or a variation on the earlier book’s content? It seemed like a reasonable question as, aside from matching subject matters, both books were co-written by Harvard|Business|School professors and even contained a discussion on the concept of BATNA. Incidentally, the stylized institute name on the book’s cover matches the logo and marketing of the school. Ironically, while a genius implies one is born with the ability and creativity, this book teaches the reader how to negotiate in the corporate world.

As it turns out Negotiation Genius stands on its own and does so exceedingly well. It could well be described as an authoritative one-stop content shop for everything on the topic within the corporate arena.

The Introduction is quick to present an intriguing situation and promise to put it through the prism of workshops, MBA courses and real life scenarios. The Introduction poses several questions as it presents different scenarios, but withholds answers. Instead, it equates “gut instinct” with “shooting from the hip” as it lays down a marker for the rest of the book to advocate a scientific and methodical approach to negotiating. Having said that, in my opinion, the two concepts are distinct and, in fact, the former is a function of experience.

Negotiation Genius is divided into three parts: Negotiator’s Toolkit, Psychology Of Negotiation and Negotiating In The Real World. It promises real scenarios and empirical research.

The book proper starts with the notion that claiming value is a must and that it should begin prior to the commencement of the negotiation. Assess your BATNA (Best Alternative To Negotiated Agreement), Calculate Your Reservation Value (or your ‘walk away’ point), assess the other party’s BATNA and RV too. Then evaluate the respective ZOPAs (Zone Of Possible Agreements), which are the areas where both parties could agree to and an understanding could be reached. It lies between the buyers and sellers’ RVs. Page 27 addresses a question that is often discussed. Who should make the first offer? Should it be you or should you allow the other party to proceed first? The authors suggest it should be you if you are in-the-know regarding the other party’s RV and can make an educated, yet aggressive, anchor offer. A lack of substantial information says that it is best to allow the other party to make the best offer. Either way, the book cites a fascinating study culled from the world of real-estate. Not for the last time the book suggests ignoring the other party’s aggressive opening salvo. A similar guidance is offered later in the book for those facing ultimate. Here the authors advise giving very low anchors of the other side no credence. On the other hand do speak about your own anchor and justify it well. Complement it by a softening proposition that you and the other party have to “bridge the gap.” The authors take care to maintain that relationships are to be preserved and one must remain cognizant of the other party’s sensitivities. Pages 42 and 43 address effective haggling strategies including the aforementioned ZOPA and RV concepts and more. Regrettably, the example of United Nations’ Richard Holbrooke is uninspiring. It is not often that one could find a $30 million donation from someone like Ted Turner to resolve an impasse.

Chapter two tackles the oft neglected, but considerably important subject of creating value. This is contrasted with the more famous notion of ‘adding value.’ To create value one must expand both the topic and the scope. Moreover, to create value one must identify all issues together and make package offers that include alternatives. One of the book’s main concepts, that of logrolling, is here. One should consider giving up something one values, if the other party values it more… except, it should not be given away. It should be sold away. The differences in priorities create value in logrolling. In short, the more issues one discusses simultaneously, the more currency one has. Page 65 offers several examples of issues one could introduce. These include financing, delivery date, arbitration clauses, warrantee, exclusivity options and more. However, when on page 69 the authors detail the Value Creation concept it does feel slightly off. For should one party’s value not be realized the X + Y formula would obviously not materialize either. The book then falls back on the concept of “expected value.” Page 72 speaks to how to prepare for negotiations. Strategies include:

In the Investigative Negotiation chapter the authors report on an actual case where “Chris” flies to Europe to break the logjam in negotiations and promptly does so by asking the question ‘why.’ Having promptly solved the problem and successfully concluded the negotiations ‘Chris’ is triumphantly back in the United States. The weakness of this instance outdoes the earlier UN example. After all what sort of a negotiating team did this company have in Europe when they had not even thought to ask ‘why’ the other party was behaving in a certain way.

The core and most concrete content of the book may be until this point. Having said that, there is plenty more on offer. One principle to keep in mind is that a negotiation should never end with a “no,” but rather either with a “yes” or “why not?” This is more consequence of value creation. Above all, logrolling depends on how much information one could get. To get information:

Part II of the book discussed 4 types of bias (mere rationality is not enough): there are biases of the mind and biases of the heart.

Part III and Chapter 7 discuss and define Strategies Of Influence:

The book tackles the psychology of negotiating at length. The strategies here are valuable and perhaps occasionally obvious, but this section is still important. Page 164 has several good ones, which, as said, may be obvious but critical to be understood (think ‘bracketing’ for example.). While several pertinent bullet points are listed on page 179 the book backs itself up by quoting Fortune magazine, which is ironic. For one, the authors had just finished stating that corporate offices are often wrong. For another, there is no indication the corporate media is any more accurate than corporations themselves. It is hoped that the authors have mastered their own logic and have no need to avail themselves of corporate journalistic opinions. A couple of other oddities are the authors’ analyses of the Nader/Gore/Bush situation when they assume the first two held many similar views. The Book empirically advises against lying in negotiating situations and prescribes against believing that experience is a good guide. Ironically, the authors do note that 72 ‘inexperienced’ MBA students also didn’t get it – likely, and this is my contention, due to a lack of practical experience.

Finally, the comprehensive Negotiating Genius offers ample footnotes, an index and a handy Glossary for quick reference. One does note that the authors mean to say ‘subconscious’ when they instead write ‘unconscious.’ That slight snag aside, Negotiation Genius does live up to its lofty title and could be seen as either a comprehensive tome or a conscious reference source.